The Festival Celebration Choir is a nonprofit choir based in Albany and active throughout the Capital Region. Founded in 1985,  the Choir has offered two major concerts each year since 1991, with the exception of 2020 (When the season was cancelled) and 2021, when there was one concert in December.  The choir often sings at ecumenical events, benefit concerts, and at nursing/rehabilitation facilities.

The choir rehearses on Mondays from 7 to 9:15 pm at First Lutheran Church, 181 Western Avenue, Albany. The Fall semester starts the Monday after Labor Day. Join us for our Fall semester! 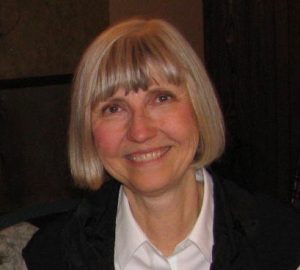 Julie has a Bachelor of Arts degree from Lawrence University in Appleton, Wisconsin, where she trained at the Lawrence Conservatory of Music, and a Master of Arts degree from the State University of New York at Buffalo. She served as Director of Music at the First Reformed Church of Schenectady for seventeen years and previously served churches in Albany, Burnt Hills, and Glenville. Ms. Panke also directs the Thursday Musical Club, a thirty-voice women’s chorus based in Schenectady and Capital Community Voices, a 60-voice mixed chorus based in East Greenbush. She is a member of the American Choral Directors Association and American Guild of Organists. She was a founding officer and former Executive Director of the Electronic Music Foundation. In 2015 she was named a Woman of Achievement by the YWCA of Northeastern New York.

Daniel White, our assistant director, is a recent graduate from the College of Saint Rose in Albany, having received a Bachelor of Science degree in Music Education. He performed as a member of the College of Saint Rose Masterworks Chorale, Chamber Singers, Men’s Glee Club, Madrigal Singers, and the Mixed Vocal/Instrumental Chamber Ensemble. He is currently working as the K-5 General Music and 4th Grade Chorus Teacher in at Schoharie Elementary School. Outside of school, he serves as a Baritone at Saint John’s Lutheran Church in Albany and teaches private piano lessons to students in the Capital Region. In the free time that he has, Daniel enjoys playing piano, whether he’s playing solo, or accompanying All-County Festivals around the Capital Region.